Raising a seed round - some reflections for founders.

We have just had the ‘pleasure’ of going through the process of raising money for a small, early stage company based in London. It was a £1.5m seed round and for anyone who reads the tech press you might imagine that this is a fairly simple process.

We had a huge advantage in that I used to work in finance and venture capital so I already had a ready network of potential investors to go to. We were also in a reasonably hot sector (in fact two: logistics and property), and had some decent investors from the previous angel round. This all helped, but still made for an incredibly drawn out process. Part of this was our fault, part of it just the industry we are in. The following is a post mortem reflection that we hope will allow other startups to learn from our experience.

We took on 6 new investors. Here are some headline stats: 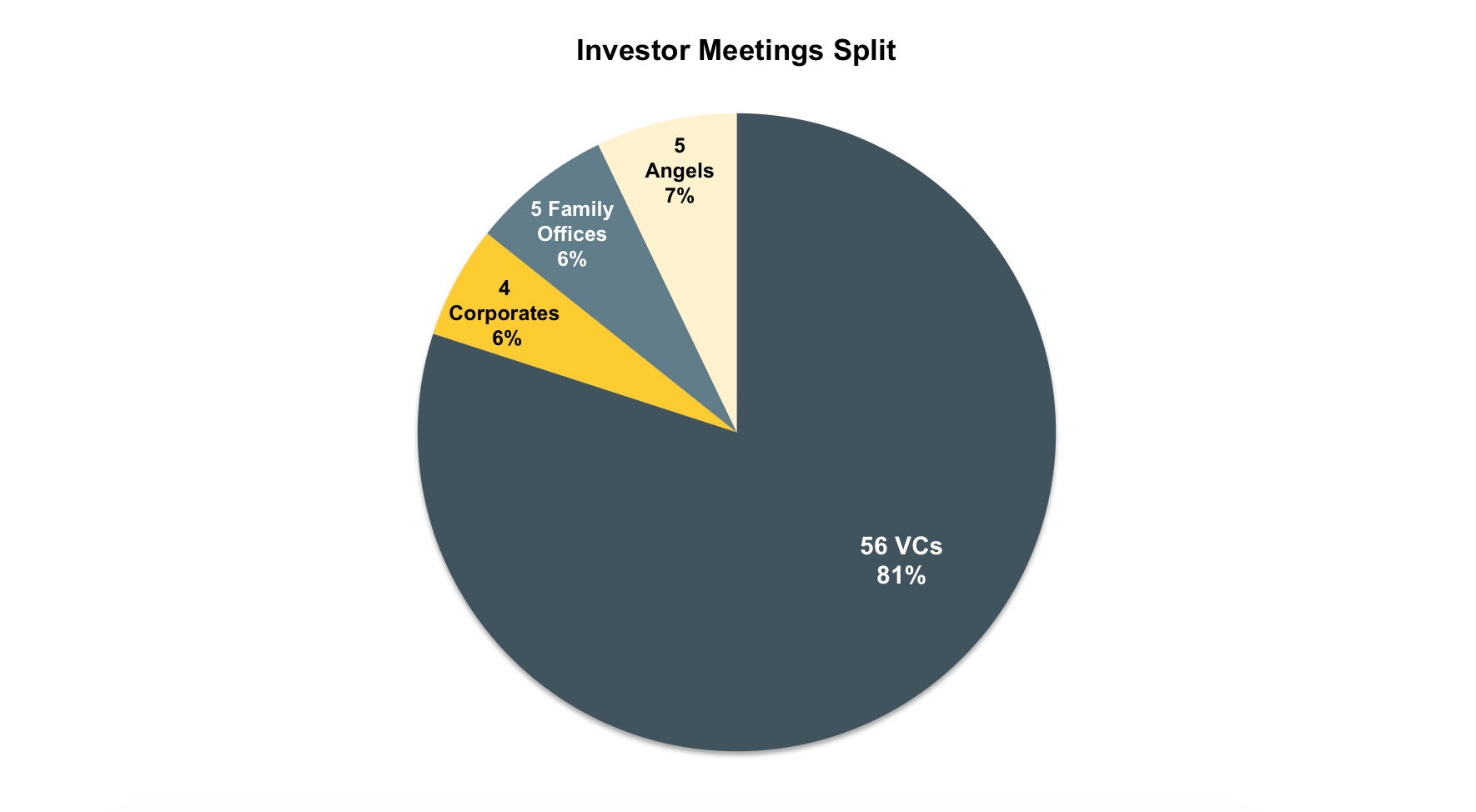 The first lesson learnt - fundraising takes time. Look at all those meetings! The hours spent on calls, emails, trains, planes and automobiles is a huge drain on your time and the business.

Fundraising is not a quick process and founders need to prepare and budget for that.

In total, we had 70 separate first-time calls or meetings. Most of the VC’s want two or three meetings and most meetings last an hour. If they’re not in your office that’s more like three hours lost per meeting once you consider travel times and hanging around. Once you decide on your investors you have to go into the legal and DD process which is going to take a zillion more meetings and calls.

The second lesson is that you can not let rejection get to you, stick to your guns, keep calm and carry on.

We kept a Trello board of all conversations and reasons for being turned down: 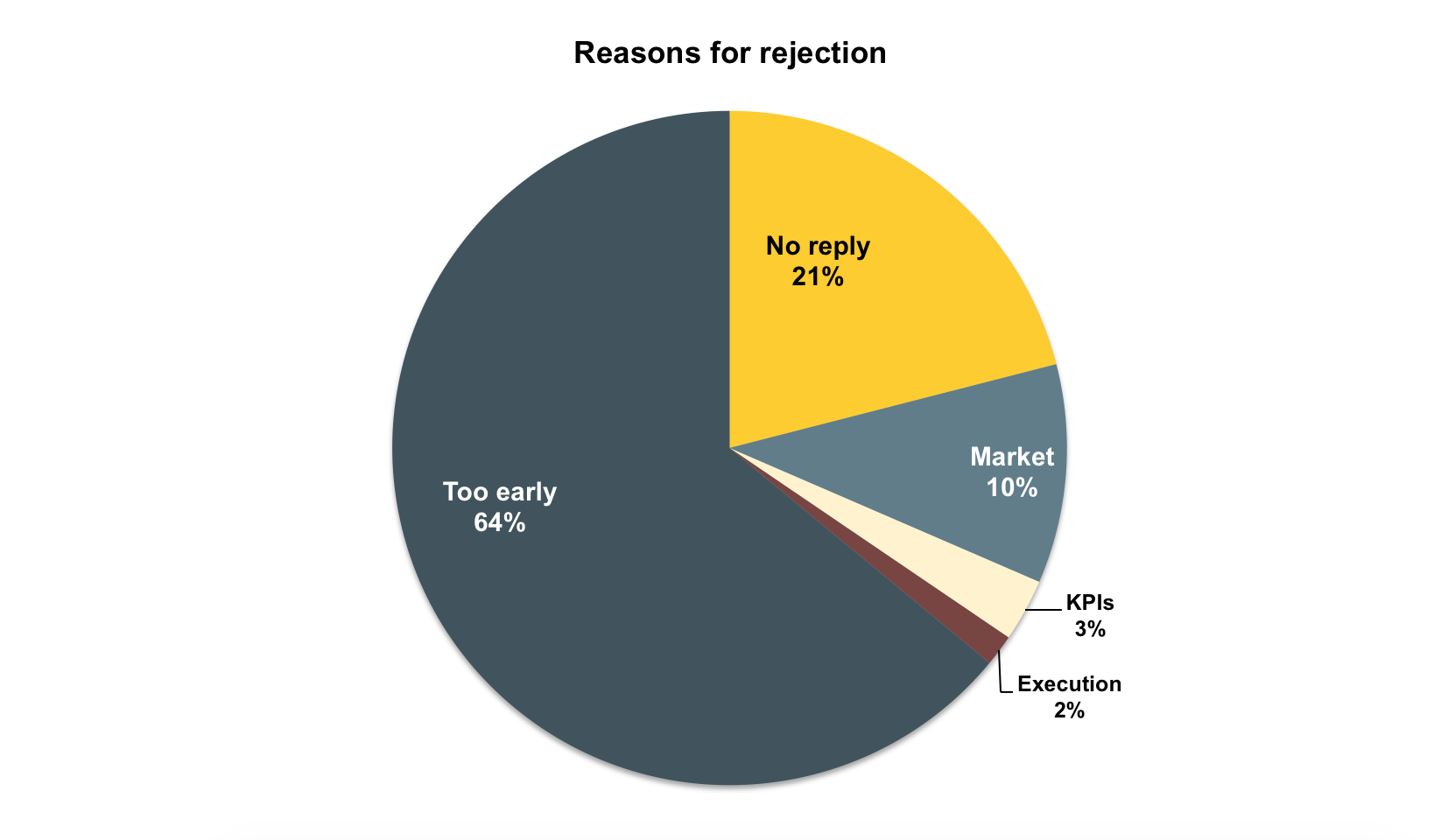 More than half who passed on us gave “too early” as their excuse. The fact is you can never be too early - funds may have ‘rules’ but the best investors will break their own rules to get into the best deals.

In my opinion ”too early” means one of two things, either: a.) They are trying to learn about your market and tapping you for knowledge. b.) They have some other more brutal reason to turn you down but offer the default explanation so as not to offend.

There may be a million reasons why they didn’t like you, but you can save yourself some time by doing some research. Others will tell you that you want to look into whether an investor invests in your sector and your stage. This might be true but what I found is much more important is whether or not they can invest. The question there is have they got any money?

Look up their recent investing history on CrunchBase - more specifically, have they invested recently with the same momentum as in the past? Lots of funds are themselves fundraising. That means they have no cash to invest other than for follow-on rounds. These guys have to keep themselves busy in between fundraising activity as well as hit their own KPIs so they will see you - but with no intention or capacity to invest.

The list of those who didn’t reply is primarily juniors from lower-tier funds. The question to ask here is - what’s their personal/professional background?

The vast majority of people who don’t get back to you are really what I would categorise as ‘learners’. When you work in VC you realise that there is a lot of money washing around the tech sector in London because: a.) it’s sexy, and b.) they are flush because there are limited places to put your money right now if you’re after a decent return.

As a result, there are lots of new VC firms springing up, many people jumping on the bandwagon - people with zero tech experience and often limited financial experience. These people should be avoided at all costs. Do your homework, background check them on Linkedin, if there’s nothing that indicates any serious expertise then avoid them. If they contact you then at most only accept a call, do not waste your time going to their office. Ideally only speak to investors who have real operational experience. They’re generally less smug and will understand the business better.

The question is what sort of money do you want? My initial thought was ‘VC’ - simply because this is the traditional source of funding for high growth startups and I knew the industry. If high growth is the game you want to play then these guys are geared up to help you with that. However, they may not be right for you. There are also:

Unless the investor you are speaking to has real first-hand experience of your market, you will know your market better than them. Unfortunately, humans have a remarkable ability to over-estimate their own understanding of markets and will think they know more than you. As soon as you get a whiff of this you should know they are not going to invest and do not waste any more time on them.

At first, we had no luck from the VC’s. We are operating in quite a niche market so we decided to change tack and focus on individuals or family offices who made their money in property, logistics or retail - i.e. people who might have first-hand experience of the problem we are trying to solve.

Within two weeks we had raised the full amount.

As soon as we were done the VCs changed their tune. Now they had FOMO and we were in a position of strength. We had a decision to make:

We choose the latter. In hindsight we are pleased with the investors we have onboard but the cost to the company in terms of the distraction was significant. Time will tell if this was the right call.

Where should this money come from?

We went with 2 angels, 3 VCs and a corporate. We wanted investors who showed deep understanding of our business and brought strategic value in the form of sectoral expertise, network etc.. but we also wanted investors with pockets deep enough that we could turn to them again if we need more capital in the future.

We also plan to scale internationally, so investors with local knowledge in our target markets were important. This lead to an unexpected discovery - the quality of the VCs outside of the UK is far higher. Scandalous statement? Treachery even?! But it’s true - particularly in Europe (and I’m only talking about Northern European, avoid Southern European VC's like the plague - they have no concept of time!)

My assessment is that because there is less money available for VC's in Northern Europe than in London it means that to be an investor in those countries you have to be that much better and put in that much more effort. The German investors that we encountered were the most impressive. For us it is an obvious target market, but I was amazed at the efficiency and the straight talking-ness of the VC’s there. Seriously - a big takeaway is to ‘look abroad’. These guys are good at what they do, half our investors ended up coming from outside the UK, putting up more than half of the money.

We had so many people trying to invest (brah ha ha) that we were able to pick the absolute best. The issue was there were a quite a few and we wanted all of them if possible. To get them all in we dictated the round with no clear lead investor putting in the lion’s share. The idea of dictating terms might sound like a good thing, and to some extent it is - we negotiated a very fair shareholder agreement, but the downside is that you have a lot of ‘Chiefs' around the table. In hindsight, it would have been a lot easier to negotiate with one investor and have all the others fall into line.

When you think about it, fundraising is not a great thing for a company. The media celebrates it and I have no idea why. No one celebrates taking a loan, so why celebrate diluting the ownership in your company? It’s a gruelling, demoralising, time-consuming process that takes key people away from the real job in hand. However, it has to be done and from a founder's perspective it is highly satisfying to close a round. Smart people are giving you their money; in a sense they are signalling that (at that point in time) they think you can make money better than they can. That's a big thing and something to be proud of - so don't give up!

I hope these takeaways for us are useful for you. If you want to find out more please get in touch on hello@stowga.com or call 0208 150 6526

Finally, if you want to find out what we plan to spend the money - see here. 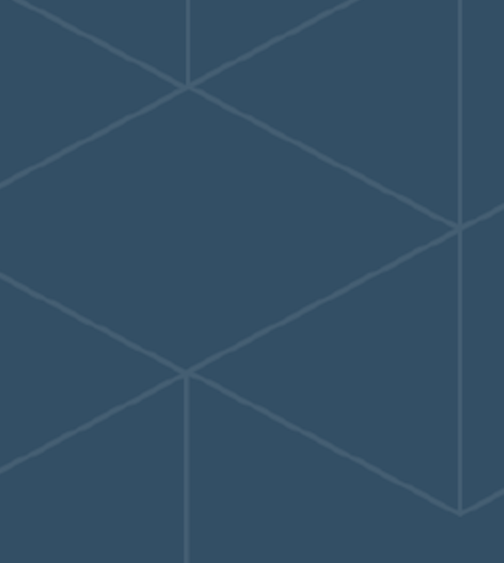