Estates Gazette interviews Charlie Pool, our CEO, about the needs of the logistics market on which Stowga was founded.

agile, on demand, warehousing as a service, tech, real estate

The logistics industry is booming, but space is at a premium as take-up hits new heights and investors look for safe returns. A new start-up aims to disrupt the sector with an Airbnb-style model set to provide a solution to the shortage. Amber Rolt reports. 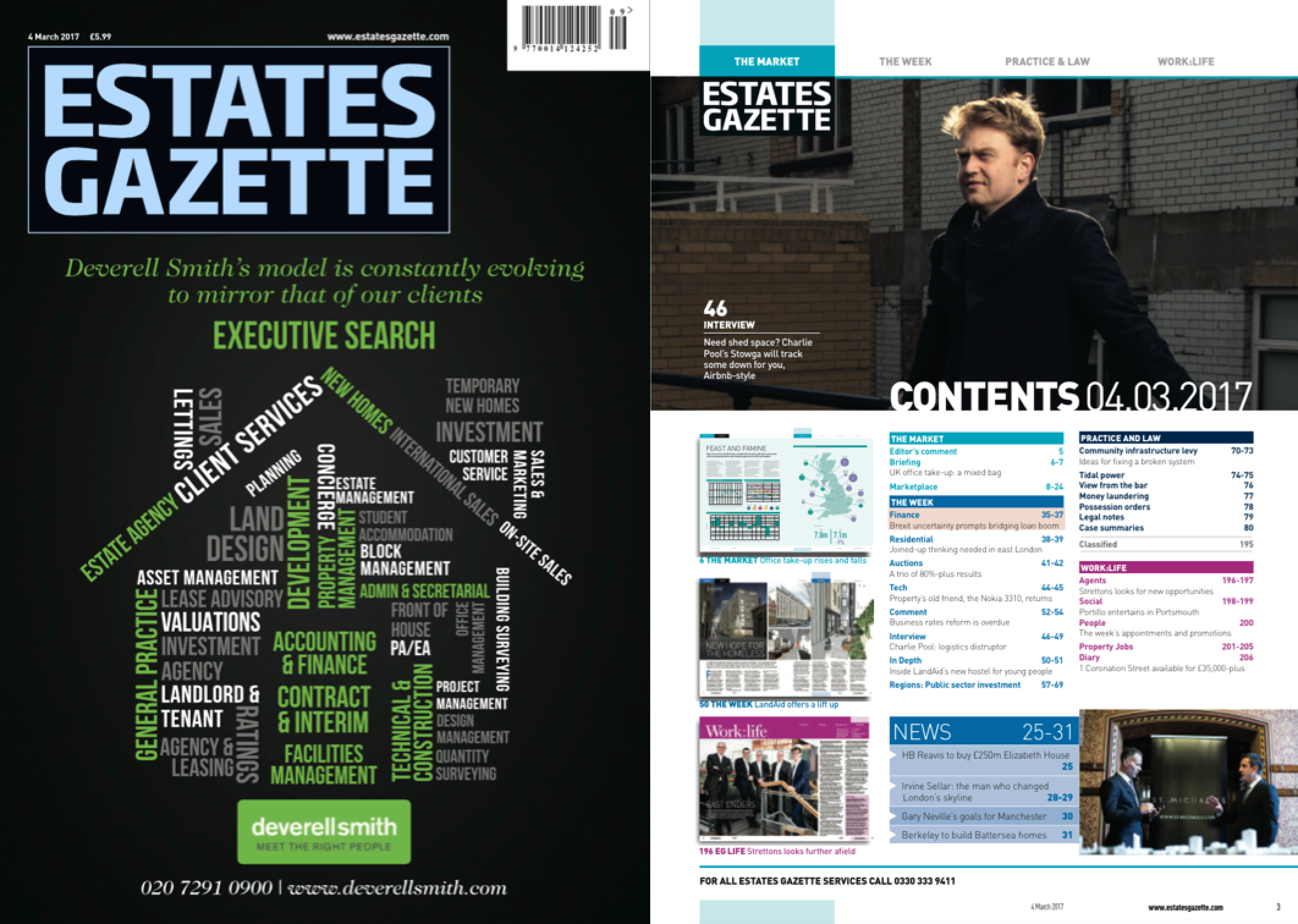 There is 2.1bn sq ft of industrial space spread over 184,928 properties in the UK. But the threat of a shortfall still looms, as vacancy rates across the country fall to just 5% following a booming 2016 for the logistics sector. And it is a boom that shows little sign of slowing down. Last year logistics take-up hit record levels with 29.3m sq ft of space acquired, according to CBRE, and a record £2.7bn invested into single-asset logistics units.

As supply has become increasingly squeezed, innovative developers have considered possible solutions. A revolutionary 2m sq ft underground warehouse is being planned in west London near Cranford and Heston that would include a 110-acre landscaped park. The warehouse will sit beneath the park in a style similar to the car park beneath Hyde Park, SW1. Amazon has even mooted the possibility of warehouses in the sky.

But the man behind nine month-old logistics start-up Stowga has come up with a simple, more immediate solution, one that is based on his observation that there is actually more space to work with than meets the eye.

“Any property developer will tell you the industrial market is supply constrained,” says entrepreneur and former JP Morgan investment banker Charlie Pool. “It might be to their eyes, but it doesn’t mean there is a lack of space, it just means that the space is not very visible. We are trying to unlock that.”

While Pool was working at JP Morgan, where he helped launch a new commodities trading business, he realised that many of the warehouses he was working on, while technically occupied, were not completely full.

“I worked out that, on average, around 10-20% of warehouse space throughout the UK isn’t used for this reason,” he says. And so the concept behind Stowga was born – an online platform where landlords can register pockets of surplus space in existing warehouses for occupiers and suppliers to take up on a pay-as-you-go basis. It’s a system that will allow occupiers to respond far more quickly to changing market conditions and to the natural ebbs and flows of the seasonal peaks and troughs that have a direct impact on warehouse requirements.

Pool says: “When you are operating in a world where a vote, a hurricane or even an 140-character tweet can change everything, you need your business to be set up for volatility.”

Like Airbnb for logistics, Pool believes that this simple system could unlock thousands of square feet across the 4,000 sites currently registered on the platform.

Not only that, he plans to simplify the entire logistics supply chain and open up access to more flexible, short term leases before scaling up the system to expand in the UK and overseas.

Stowga launched in May last year after Pool raised £300,000 in February 2017 through investors including Hambro Perks, Seedcamp and some individuals from Goldman Sachs, BlackRock and OneFineStay.

The platform has been set up not only as a basic function to locate pockets of unused logistics space across the UK, but to simplify and streamline the supply chain at the same time.

“The warehouse has always been the sticking point in the logistics supply chain,” says Pool. “It’s the blind spot. If you have taken a long lease on it, that is a massive liability that you are suddenly stuck with.”

While he says that the old way – long-term leases and fixed supply chains – is reliable, the time has come to adapt. “The approach needs to be more agile and reactive,” he says. “It needs to be more flexible to the volatility of a changing world.”

“The big 800lb gorilla in the room as far as the logistics supply chain goes is the warehouse. Imagine this from the perspective of the occupier: Brexit happens and your country’s currency drops by 20% in value overnight. The line of Levi’s jeans you have been importing from the US is now uncomfortably expensive. “You can’t pass that cost on to the consumer, so what do you do? You stop ordering them. Great. No more jeans. Cancel the ships, cancel the lorries. But, hang on, what’s this? The warehouse, which you can’t cancel because you signed a five-year lease. It’s a liability. A big one. And an expensive one.”

Pay as you go

Deals via the Stowga platform are kept flexible as they are done under a service charge agreement rather than a lease. Stowga takes a portion of the storage and logistics charges, which vary depending on the stock or building. Most of the contracts are on a rolling monthly basis, with people generally looking to take space for a month or up to a year. As for costs, Pool says it varies depending on what is being stored. “It might be fresh food, it might be diamonds. You have to think about security and temperature, so everything is slightly different,” he says.

But, as an example, he points out that food storage is normally charged at around £5 per pallet.

Pulling stock onto the platform has not proven to be too difficult, as Pool says that appetite on the landlord side has been strong. “These are businesses that run a very tight margin and we are offering additional revenue at zero up-front cost – the landlords only pay us a success fee as a percentage of the revenue that we bring in for them. As far as I am aware, of the 4,000 sites that we have on our books, I don’t think that anyone we have contacted has not agreed to be on the platform.”

The model looks to be working so far. In the nine months that Stowga has been up and running it has attracted interest from an array of occupiers including SA Group, Baader and drinks giant Vimto, with which Stowga recently completed its fifth deal.

“[Vimto] is a great example of a firm that came to us,” says Pool. “It had two or three big operational centres and asked us to review its strategy and to put it into multiple, small regional places. We found the company spaces in Woking, Southampton, Bournemouth, Tamworth and Rotherham as well as looking for space outside the UK.”

On top of simplifying the supply chain, Pool points to a number of other benefits to the occupier that come from keeping flexible. Normally, putting the product in multiple, smaller locations where the occupier needs it, money and energy are saved, given there is less need to ship the product from one warehouse to another up and down the country.

As a result, Pool has also begun working on a panel with local councils and German electronics company Bosch on how to make logistics more environmentally friendly.

“Because we are optimising not just warehousing but logistics, that means there is not only the financial benefit that comes from not spending as much on transport, but also an environmental one – there will be a reduction in pollution as the lorries burn less fuel.”

This is on top of Stowga’s ultimate goal to ease land supply constraints across the “When you are operating in a world where a vote, a hurricane or even an 140-character tweet can change everything, you need your business to be set up for volatility.”

This is on top of Stowga’s ultimate goal to ease land supply constraints across the logistics sector and Pool has ambitions to expand overseas.

The company is working on its next round of fundraising, which will be used to expand its business in the UK.

“We do not want people’s goods to be confined by static space. We want people to be able to place inventory anywhere in the world in the right place, at the right time for the right price. That’s the high-level vision,” he says.

“Things are moving in the right direction, but we need to have the most efficient ways of finding customers warehouses and financing.

“If we can prove that in the UK, we will have a starting point to take it global.”